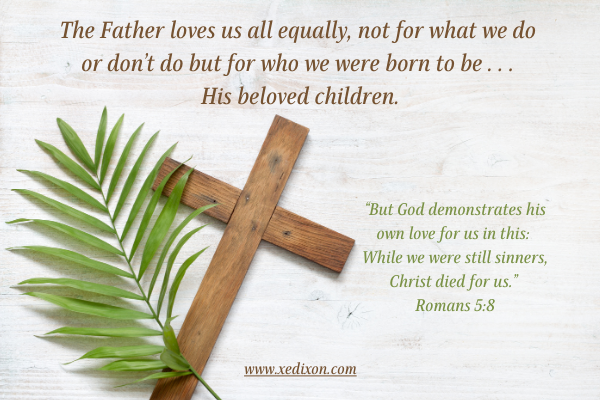 I grew up loved but feeling unlovable.

I didn’t think people could express love in different ways. I didn’t understand that wounded hearts didn’t really know how to show love in healthy ways. I didn’t even know that I was clueless when it came to showing love or recognizing and receiving love from others.

When I heard about God’s unconditional love, I immediately started looking for loopholes.

How could a good God love someone who was so far from good?

I’d read the parable of the prodigal son (Luke 15:11-32) countless times before I figured out that I’d been missing a big point in the story by only focusing on the main character ̶ the lost son.

As God drew my eyes toward the father in the story, I stepped back and looked at what the Lord chose to share before and after the story of the prodigal son.

When Jesus shared “The Parable of the Lost Sheep” with a crowd of “tax collectors and sinners,” the religious leaders criticized His choice to keep company with such riffraff. Jesus knew if they were ever going to get to that righteous sweet-spot, they would need to be in His personal space.

Jesus knew the religious leaders had grown accustomed to judging those who they considered too-far-gone to be invited into God’s Kingdom. The religious leaders must have plugged their ears when Jesus proclaimed “there will be more rejoicing in heaven over one sinner who repents than over ninety-nine righteous persons who do not need to repent” (v. 7).

In “The Parable of the Lost Coin” (vv.8-10), Jesus affirms each lost sinner is just as valuable and irreplaceable as the sinners who fluff their feathers and flock to prestigious religious events.

When Jesus introduced “The Parable of the Lost Son” (or the Prodigal Son), I focused on the biggest sinner in the story, the guy I could relate to most, the lost one, the messed up one, the one who knew he wasn’t worth a second chance.

But the father in this story had two nameless sons and I had no idea that I resembled both at different times in my life.

The younger son demanded and received his “share of the estate” from his father (v. 12).

For years, I read those words and bristled. Give me? Whose estate? Pause. Rewind. Does someone need a little home training? I know our sons wouldn’t dare demand we give them anything. (Let’s pause so I can adjust my crown of self-righteousness.)

After a while, God showed me how often I’d approached Him with similar demands. (Let’s pause so I can slip that crown of self-righteousness off and slink away with my head hanging low.)

Just like the father in the story, God didn’t let me wallow in shame or guilt. He turned my eyes to the father and helped me realize what I’d been missing for years.

Some parents understand the heartache of watching an adult child make decisions that we know will lead to painful and sometimes scarring consequences.

Some of us have held on so tight that we squeezed the life out of our beloved children.

Some of us have let go and watched the horizon, desperately praying for God to bring our prodigal children home before they hit rock bottom (vv. 13-16).

Some of us have even gone to retrieve our adult children when they discovered no one else wanted to help them.

Some of us have been rejected even after retrieving those adult children who suddenly realized they didn’t need us after we’d rescued them.

Like all rebellious souls, the lost son eventually had nothing left and nowhere to go. He “came to his senses” and realized that his father’s “hired servants” were living better than him (v. 17). He devised a plan, prepared a speech filled with begging and self-deprecation, and headed home (vv. 18-20).

“But while he was still a long way off, his father saw him and was filled with compassion for him; he ran to his son, threw his arms around him and kissed him” (v. 20).

The father had been watching the road, expecting him to return, wanting to welcome him home.

I imagine the son reeked of sweat, dirt, pigs, and anything else he picked up along the way.

Did he consider cleaning himself up before returning to the father, making himself more presentable, proving he deserved receiving another chance?

How would the father respond to his son’s reeking, sin-scarred life?

Before the lost son could spill out his well-rehearsed speech, the father welcomed him home with joy (vv. 21-23). The father didn’t chastise him, demand an explanation, scrunch his nose at the stench that must have been quite ripe.

When his older son returned and heard the party in full swing (v. 25). He didn’t ask if his brother was okay or rush to see him. Scripture says he “refused” to go into the house . . . so his father “went out and pleaded with him” (v. 28).

Blinded by bitterness, he listed the ways he’d been faithful to the father over the years and griped about the things he did not have (v. 29). He referred to his brother at arms-length, calling him “this son of yours” instead of my brother (v. 30).

Instead of chastising or rebuking the older son, the father affirmed the security of his inheritance, which would be of even greater value as time passed (v. 31). He encouraged his son to acknowledge the greater meaning of his brother’s return (v. 32).

The father valued both sons equally, not for what each did or didn’t do but for who they were born to be . . . his beloved children.

As I consider all of my sins, past and present and those yet to come, I know I am always desperately dependent on the Father’s goodness and unconditional love for me and my reeking, sin-scarred life.

My heart aches as I recognize my similarities to the lost son.

I’ve ended up knee-deep into the muddy fields of disobedience and self-indulgence when I wandered from my Father’s presence.

I’ve squandered the gifts He’s given me, made selfish demands, taken Him for granted.

My heart aches as I recognize my similarities to the older son.

I’ve compared my sins to the sins of others, as if comparison could make my offenses more acceptable.

I’ve been bitter when someone received grace after hurting me, even when I knew I’d be begging for grace if I was the one crawling back with nothing more to lose.

I’ve focused on what I didn’t have instead of thanking the Father for all He has given me and promised me.

I’ve forgotten that nobody needs to work a little harder or be a little better to be worth loving.

As we prepare for Good Friday, it’s important to recognize how God’s unconditional love led to Jesus hanging on that cross in Calvary.

He cleared the debt caused by our sins in full and in advance, so that we can have a new life in Him.

Jesus did all the work necessary for our redemption and reconciliation with the Father.

But our good, good Father will never try to force Himself on us.

He lets us go when we’re determined to be rebellious, but never leaves us alone or loses sight of us.

He understands we’ll be tempted to wander into the darkest corners of disobedience and disbelief but keeps reaching for us.

The Father loves us all equally, not for what we do or don’t do but for who we were born to be . . . His beloved children.

His unconditional love can heal raw wounds and soften old scars, transforming us into beacons of hope and using us to help others find their way home to Him.

When we grow accustomed to traveling the rocky roads of rebellion, seeping our hearts in resentment, bitterness, and fear, we can become trapped by the lies of comparison and works-based faith.

But as we celebrate how the Father proves His love for us in all three of the parables in Luke 15, we can take Him at His word and answer yes to this question:

Do you really believe God loves you unconditionally?

(Please pause to place the crown of life securely on your head as you shout or sing, “YES!”) James 1:12, Revelation 2:10

Which brother in the parable do you most relate to and why?

When have you wandered from the Father’s presence?

How did you respond to God’s unconditional love upon your return?

When has it been difficult for you to believe God’s love and grace are freely given to you?

When have you compared your sins to the sins of another to justify rejecting them?

When have you refused to extend mercy toward someone else who returned to the Father’s loving embrace after a season of rebellion?

Loving Father, thanks for reminding us that You are always with us and always ready to welcome us into Your loving embrace. Please bring all of Your lost ones home and help us to love them as You love us. Forgive us for the times we’ve tried to earn Your approval, work off our guilt or shame, or judge others for their sins as if our sins were more acceptable.

Please purify our hearts and our motives so we can build healthy and holy relationships with You and others. Give us the courage to come alongside one another as we invite You to transform us with the heart-healing power of Your infallible truth and unconditional love.

Please join me for the Pause for Prayer video series and subscribe to my YouTube channel today by clicking here.

Thanks for your loving prayers and support. I look forward to growing with you! 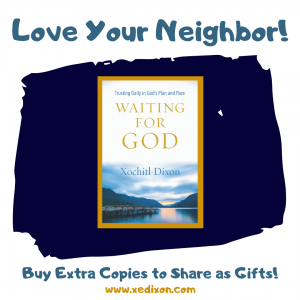 Have you read Waiting for God: Trusting Daily in God’s Plan and Pace?

If your heart is weary and longing for answers—for healing, for provision, for miracles—Waiting for God renews your hope with strong biblical truth and encouraging Scripture-based prayer. Guided to inhale God’s Word, exhale in prayer, and rest in God’s love, you will be restored, able to worship the Lord even when the wait feels endless.

I share personal stories and the experiences of others to help you reclaim your peace and joy, knowing God has not forgotten you.

You can order your copies of Waiting for God: Trusting Daily in God’s Plan and Pace and love your neighbor by ordering extra copies to share as gifts today (click here).

If you’ve already read Waiting for God, I want to thank you and ask you to please bless me by writing a short review on Amazon (click here). The more reviews a book receives, the more Amazon shares the book with visitors.

Thanks for helping me spread God’s truth and love in this simple way.

To receive new blog posts direct to your email inbox, sign up here!